In September 1993 I went to Cinecon in L.A.  I’d been (and continue to go) to Cinefest in Syracuse, NY which is a wonderful event to attend for anyone who loves rare, vintage film but Cinecon also boasted having special guests that I couldn’t pass up on getting a chance to meet.

I wish I could have attended more Cinecon events afterward, but so far, have been unable to make it there.  I don’t have pictures of Buddy Rogers or Edward Dmytryk who were there.  However, Edward Dmytryk once attended at TFS event for the screening of his film The Caine Mutiny and I had the opportunity of meeting him and his wife when I picked them up from the airport to deliver them to their hotel.  So here are some pictures of some of the people I did meet:

Ronda, Douglas Fairbanks Jr. and Me 1993

And people I didn’t meet but that spoke as well: 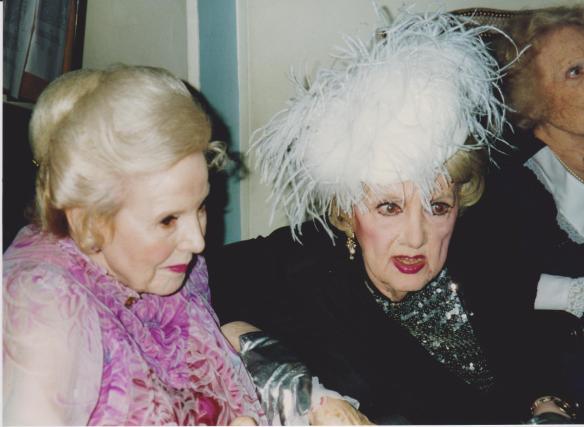 Anna Lee also was invited by TFS many years ago before I was on the board to attend a screening of a film she was in.  I don’t remember what film it was but it was at the Crest Theatre in Toronto and there were a lot of people who attended to see her.

Here are some great weekend film festivals where rare films, some nitrate and 35mm prints are shown: