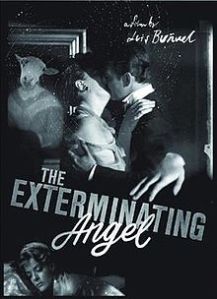 During the week above, I only had time to watch two films, both foreign, both available on Criterion and both truly great!

The first was La Chienne (1931), directed by Jean Renoir.  Even when I don’t know much about a film, I never like to read about it before I have a chance to watch it for myself.  So after the initial scene that introduces us to our protagonist, Maurice Legrand (Michel Simon), I realize I’m watching the precursor to Fritz Lang’s Scarlet Street.  Although I’ve seen Scarlet Street on a couple of occasions throughout my film-viewing career, probably as recently as seven or eight years ago, I don’t recall all the intricate details; mostly just the main plot–and the toenail painting scene.  What I think is an obvious difference between the two films is the ages of the actors portraying the three main characters.  In the French film, everyone is younger by a decade or more, with the biggest difference being the ages of the two leads, Michel Simon at 36 with Edward G. Robinson being 52.  People may not change for the better as they get older, but I think the difference between using younger versus older actors is that although all people can be connivers, the characters in their twenties may not be conscious of the consequences of their actions.  With age comes more awareness, if not wisdom.  If I’m remembering correctly, there’s more planning, thought and awareness of how the younger couple’s scheming will affect the third party.

The film is based on a best-selling novel with the same title, translated in English as “The Bitch” by author Georges de la Fouchardière.  Maurice Legrand is a lowly clerk with a monotonous seeming job working for a hosiery company while his true passion is painting.  He is married to Adèle (Magdeleine Bérubet) who is very controlling, limiting her husband’s allowance which he spends entirely on art supplies.  The film opens up with Legrand at a company dinner where we learn he is the butt of everyone’s jokes, considered by all a henpecked husband, dull and unimaginative.  Legrand certainly does give us this impression especially with his monotone way of speaking, but as we learn more about him, we know that these traits are all a guise wrapped up in an unattractive body.

Choosing not to continue the evening with his colleagues who appear to be heading out to a brothel, Legrand heads home on foot so as not to miss the curfew his wife has set out for him.  This is the point where we meet up with the two other main characters of the story, Lulu (Janie Marèse), the prostitute he falls in love with, and Dédé (Georges Flamant), her pimp.  Lulu loves Dédé, and the more abusive he is to her, the more in love and submissive she is towards him.  When Legrand witnesses Dédé smacking Lulu, he comes to her rescue, rather easily knocking Dédé to the ground.  Rather than finding this charming, Lulu is immediately alarmed that her precious pimp is hurt.  Legrand, attracted to this damsel in distress and with motive in mind, befriends the two of them, offering to accompany them to their respective homes in a cab he has ordered.  This, Dédé decides, is the way that Lulu can make up for losing an earlier customer which was the reason for the smack, insisting she entice this “rich artist” to become her next sugar daddy.  So, as you can see, everyone does not present who they really are. 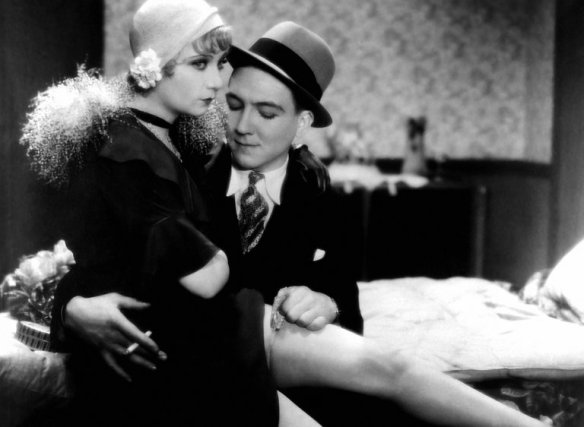 I’ll leave you to the rest of the story, but here are some observations.  When we first witness the behaviour of the Legrands, you can’t help but wonder if Adèle is partially so controlling because Maurice is so passive-aggressive.  Adèle is always holding up to Maurice how ideal her first husband was, the deceased Sergeant Alexis Godard, always comparing while pointing to his picture hanging on the wall.  This could be to make us try to imagine what a younger Adèle must have been like in a loving relationship–or that it was a lot of crock if Adèle was what Adèle is.  Either way, the two of them are most unpleasant, but amusing to us, together.

There’s a crucial scene between Legrand and Lulu and if the subtitles were accurately translated, then the language was rather shocking, especially for 1931.  The novel was written in 1930, and I can only imagine how inflammatory the title would have appeared, especially when translated into English.  Without having a copy of the book handy and never having read it myself, I don’t know how much dialogue Renoir used verbatim when adapting the screenplay. 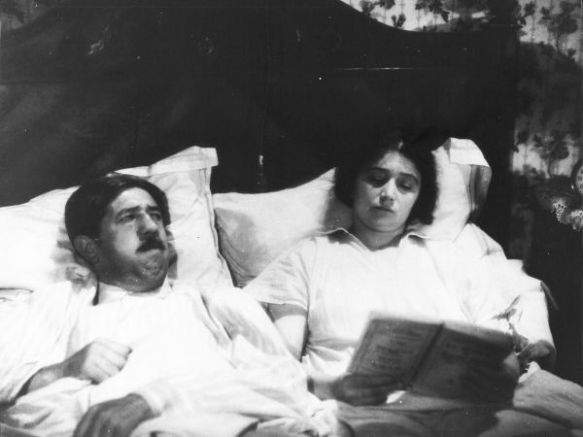 If you know the story through watching Scarlet Street, you know what befalls all the characters as well as the final scene with Edward G. Robinson.  Again, I haven’t seen the film in a few years but the lingering impression I remember is that of a very distraught man viewing his artwork through a gallery window.  It’s disturbing and regretful and as viewers, we definitely feel unsettled.  But the finale of La Chienne, although pretty much the same sort of visual ending, is amusing, cheery even.  Legrand, who we know has become somewhat monstrous, doesn’t appear much concerned, or certainly not for longer than a second or two, when he sees his painting hanging in the window of the gallery.  And just to add a little perk for viewers who might be aware, Renoir features one of his own father’s paintings in that scene.

The actress, Janie Marèse, was only 23 when she played Lulu.  With three shorts and only one other feature film under her belt, she died in a car accident while out driving with her lover George Flamant who played Dédé in the film, apparently before the film was even released.  This brought to mind the American actress, Dorothy  Dell, who died in 1934 in the same manner at the even younger age of 19 after appearing in one short and three feature films, including Wharf Angel which I saw at Cinecon in August.

Lastly, when the film credits rolled at the beginning of the film, I noticed the name of the Production Director, Charles David.  He was the third and last husband of Deanna Durbin, who she may have first met when he directed her in the noir film, Lady on a Train (1945).  The cinematography by Théodore Sparkuhl is especially noteworthy. 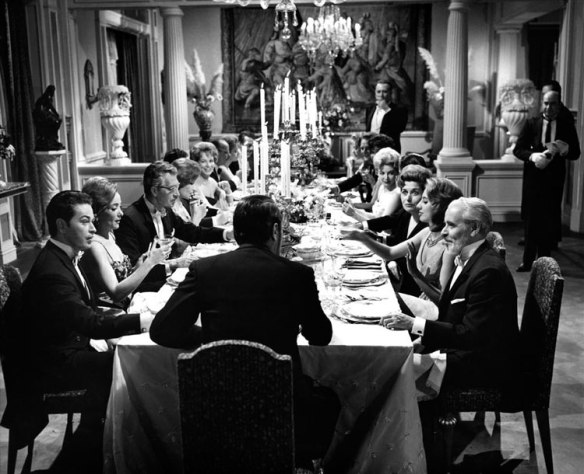 Later in the week I watched The Exterminating Angel (1962), not only directed by Luis Buñuel but co-writer of the story along with Luis Alcoriza, and singularly the writer of the screenplay.  I thought I had seen this film before, but there was nothing familiar except for knowing the premise of the story: a group of society people attend a dinner party and afterward are unable to leave.  So how can a story where you only guess at why they can’t leave, how long they are prisoners kept together in one room, and why no one can rescue them, be so absorbing?  Buñuel, a master of surrealism and the absurd, with an understanding of human psychology and an apparent sacrilegious view of the religion he knows best, Catholicism, is able to do this superbly with intelligence and wit. 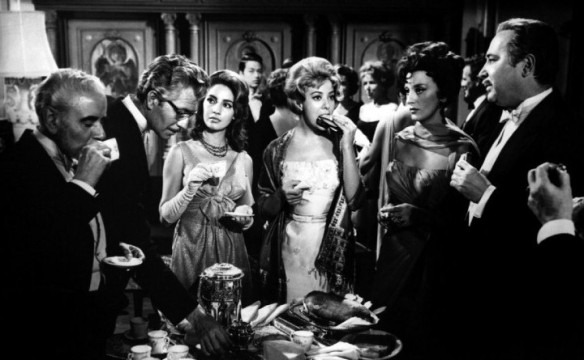 A whole world happens in this 95-minute film.  Before the guests become prisoners, Buñuel prepares us.  There’s the odd behaviour of the servants, needing to escape their employers’ home without knowing why, and noticeable repetition of events that become scattered throughout the narrative. So what happens in this small world of captured socialites?  The most obvious is the loss of dignity.  The host and hostess, a married couple, are both having affairs, the wife previous to being a captive, while the husband finds romance during.  There’s death, illness, psychological unhingement, hallucinations, hunger and thirst, selfishness, theft, battles, sex, drugs and medication, uncleanliness, animal sacrifices (yes, there are sheep and a bear walking throughout this stately mansion)–pretty well everything that could happen in an unhealthy, impoverished society short of cannibalism. 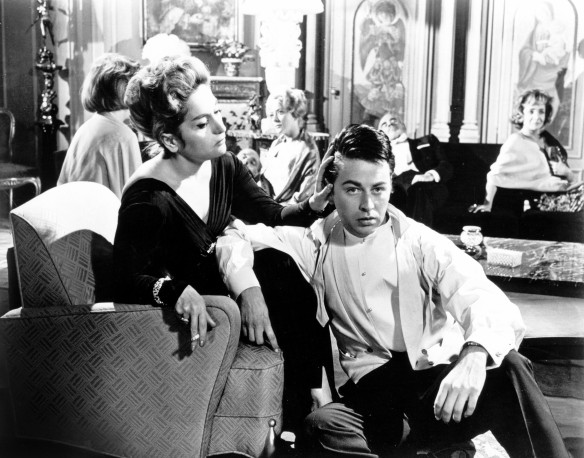 There are two Jewish references of sorts in the film.  The most obvious and out-of-place moment was early on just about the time when reality shifts, when freedom turns into captivity, the actress Silvia Pinal throws an ashtray, shattering a window.  Two guests, hearing the glass breaking, comment, “What was that? “Somone broke a window.  It must have been a passing Jew.”  Anti-Semitic, it surely seemed, and I wondered why Buñuel wrote these lines.  In an interview from the 1970s, he explains: “To an anti-Semite, anything, even lightning, can be the Jews’ fault.  In other times, people blamed the Jews for poisoning fountains and rivers, causing plagues.  It’s an anti-Semitic characteristic that you find in certain sectors of the bourgeoisie.”

The second reference was when people were saying the secret or unspeakable name for God, deciding if they could say it or not.  What caught my attention was that even in Spanish, they used a Hebrew word such as “Adonai“, “Elohim” or possibly “HaShem” which isn’t, as far as I know, the secret name.  Is that part of Catholic doctrine?

And the moral of the story, although I doubt there’s any moral here, is that life is a cycle.  The victims, when finally able to figure out a way to be released from this crushing ordeal, go to church to pray in their own way, or at the very least to put on a pious face.  And when the camera pans each of these faces while the priest mumbles away at the liturgy, you really can’t take your eyes away from the screen in fascination of each character’s expression.

When I was rather young, my mother told me one of Buñuel’s stories which left an impression on me.  It was the 1953 film El, and I finally had a chance to view it twice, the last time maybe 15 or so years ago.  I don’t believe it has ever come out on DVD but I would love to see this film released over all his others.  I’m glad, though, that I finally saw The Exterminating Angel.  Besides El, next on my list is The Discreet Charm of the Bourgeoisie.  At least I hope to once I find a copy.