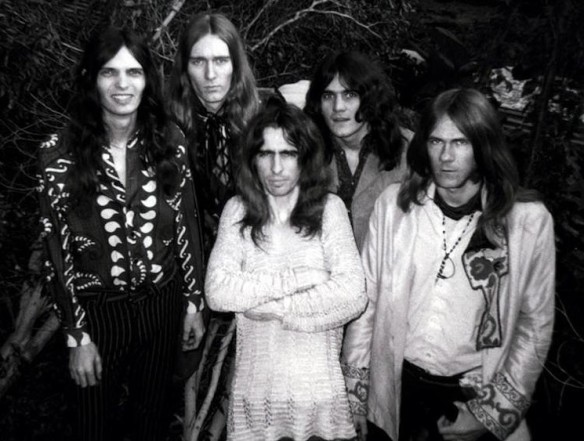 This doesn’t have much to do with vintage or classic films, but I’ve been thinking for quite a while that it would be fun to recall and relate incidents of meeting–well maybe not quite meeting, but seeing–famous people.  Sometimes when I think about who I’ve met, and only very briefly, the famous names start to add up.  When I was young, this would enthrall me.  It still can be impressive, but, now I know that they are just people.

I’ve “met” Alice Cooper four times.  He wouldn’t remember any one of those times but here are my memories.  When I was 14 years-old (and when my parents had no idea what rock concerts could possibly be like), I went to one that was called “Beggars Banquet”.  The Rolling Stones 1968 album of the same name was already renown since this was the summer of 1971 so I just thought most of us thought it was cool that this Toronto concert went by the same name.  I have no idea where it was, but I went with my teenage best friend Susan on some allocated concert bus to somewhere out in Etobicoke, I think.  But seriously, who knows where it was.  The important fact was that we just got there. 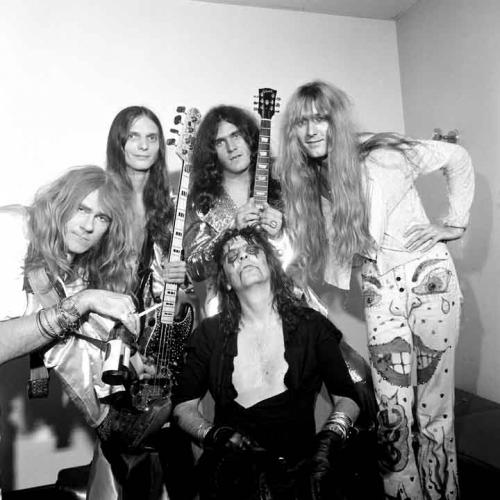 I remember when we did get there, some cute hippy-type guy, probably well into his 20s, directed me to a table that was offering an assortment of fruit. Yup, red grapes I particularly remember.  The poor fellow, though, was missing a hand.  It was kind of freaky to a 14-year-old.

Anyway, this was some amazing concert.  Here was the lineup: Lighthouse (Toronto band), Beach Boys (I remember there were four of them), Bread (they had at that point at least one big, huge hit, maybe it was “Made It With You”), Alice Cooper (“Eighteen” had just become a hit and my favourite), Bloodrock (I didn’t really know who they were), and Steppenwolf (legendary).  So, we sat near the stage and I truly can’t remember when but we sauntered backstage and walked by Alice and his band while they sat with their backs against the fence separating them from the audience either before or after their magnificent performance, the Love It To Death operetta.  The guillotine sequence was remarkable.  Nothing topped that until Genesis came along with Lamb Lies Down. 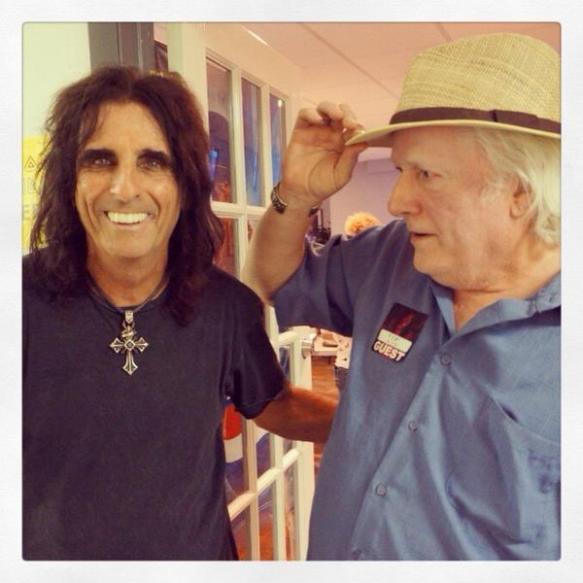 So, I really didn’t meet anyone from Alice Cooper in 1971.  I just strolled by them.  But around two years later, when I was sixteen, I went to a Lou Reed concert at Massey Hall, again with my teenage friend Susan.  Lou was in his blonde-haired, heroin phase, possible very close to releasing his Metal Machine Music album (which of course I bought).  I already knew about junkies, having met some when I was 14.  I wasn’t interested in their issues, nor did I find “junky-ism” attractive.  But when guitarist Dick Wagner showed up with his pal, Alice Cooper, I was stoked!  (I’m not sure that word existed then.)  I went up to the right-side of the stage and just goofily stared at Alice.  Wagner saw me ogling and motioned for me to come up the stairs.  I did and then said the stupidest, and typical of me, thing I could say to my current idol, “You’re my favourite Rockstar and I love you.”  Either chivalrous or already extremely drunk, Alice Cooper placed a sweet little kiss on my lips.  I was thrilled but that also was the end of my love of the band Alice Cooper.  Maybe that’s because he noticed I had bangles on my wrist.  These were just cheap things, but at the time I thought they were cool.  He asked me if he could have one, choosing the one he wanted.  Regardless if that’s the reason, from there, I moved on to loving other bands.  Fickle, I realized was what I was.  But still, there was a bit more that occurred that night. 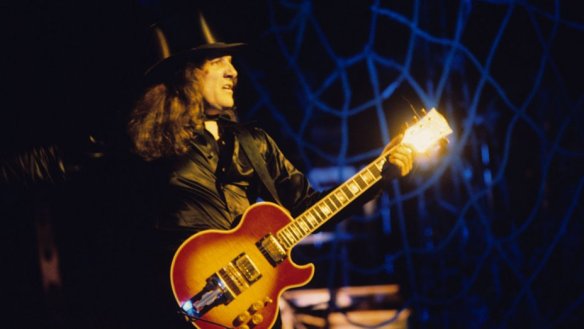 I was invited to come backstage.  I don’t remember the details now, but I must have alerted Susan because she came backstage too.  Now Susan was way more glamorous, even as a teenager, and more sophisticated than I was.  I would just stare at my idols.  She engaged with them.  Alice and Dick were there with, I believe session guitarist Steve Hunter.  I seemed to recognize him from a music magazine I read. 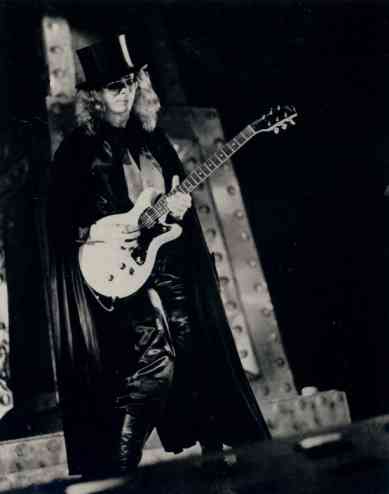 But being the stupidly sensible girl that I unfortunately was, I knew that both of us had left our winter coats at our seats.  I was way more the type of person who would worry about what my parents would think if I lost my coat.  So, I decided I should go back and retrieve mine.  Susan asked if I would get hers since I was going anyway.  And the coats were still there.  I got them, and when I walked onto the stage to head backstage, some guy looked at me and said: “Fuck a star”.  I realized he thought I was a groupie, but I was truly just an unsophisticated girl who loved rock music and musicians.  But to this day, I never forgot that that’s what he said to me and know it would have been different if I had been a male. 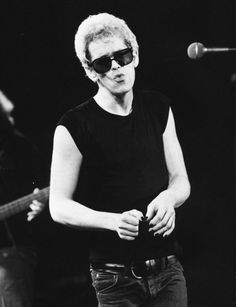 This was the only time I ever was backstage at Massey Hall.  It seemed like a maze to me and that’s how I remember it to this day.  So here I am, trying to find the room that my girlfriend and Alice Cooper are in.  I see a line-up and decide that I don’t need to wait in it because I had already been in the room.  I just open the door, and this is what I see: Lou Reed being held down while trying to get up from a lying down position on a couch.  Within 15 seconds, the guy at the door asks me what I want, and I say that I’m sorry, I was knocking on the wrong room.  And I walk down the hall to the room that has no line-up and head back in to stare (creepily, I’m sure) at Alice, who is swigging from a bottle, possibly, if I remember correctly, of Seagram’s VO.  The opening act for Lou was weirdly and inappropriately Hall and Oats.  The blonde guy was cute, I thought, but their music was totally uninteresting to me.

The third time I “met” Alice Cooper was at his rock concert at Maple Leaf Gardens.  I have no idea what is held there these days (I think it’s part of Ryerson University possibly) but I saw many a great concert there, especially since I had reserved seats, twelfth-row centre.  So here we are, my sister Ronda was there too, and Alice is performing with his dancer-wife, Sheryl Goddard, and I have been delegated to deliver him a bracelet.  This bracelet was made by Ronda.  It consisted of tiny beads spelling his name.  What we decided to do was put our names, address and phone number on the inside of the bracelet.  He noticed this and, then I shared the most intimate moment with him that I ever would; he looked me in the eye, smiled and held up his finger, moving it side-to-side to say “no, you naughty girl”. I don’t know what we really expected.  Invite him to have dinner with the family?

The last time I ever ran into Alice was when I was in New York and in the famous St. Mark’s store, Trash and Vaudville.  He came in with two Aphgan Hounds on leashes, just looking around.  We did make eye-contact, but by then I was well into my late 20s, maybe even early 30s, and I had no idea what to say.

And that will bring me to my next story about running into Prince, same store, different day.