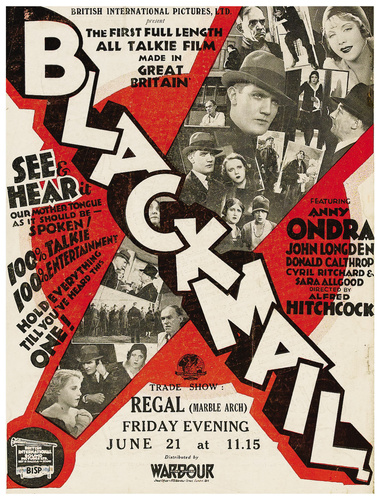 Last Sunday I went to the Revue Cinema in Toronto and saw the silent version of Hitchcock’s Blackmail.  It must have been so many years ago that I saw it—I think it was the talkie version of this film—that I had no memory of the story any longer .  This print, or rather digital copy, was remastered, pristine and beautiful.  After it was over, I couldn’t wait to get home and watch the film all over again, or at least what I believed was the talkie DVD that I own.  I was concerned, though, that the copy that I had would be a terrible print and lately I’ve been debating with myself if it’s worthwhile watching a print that’s awful versus not seeing it at all.  But I was pleasantly surprised to find that my print wasn’t bad at all.

I had not read anything about Blackmail, so had no idea what to expect; what shots would be the same and what would have to be changed for it to be made into a talkie.  The silent version at the theatre was introduced by the curator, Alicia Fletcher, a very impressive speaker, and although I don’t recall if she said the silent was made first, I think I just presumed it was, given that in 1929 most films were still being made as silent.  Many directors thought that talkies were just a fad that would soon pass (Ms. Fletcher alluded to this in the case of Hitchcock) and that if a film was to be made in both genres, that it would make sense that the silent medium would be most studios’ first choice, given that was where their expertise, as well as their equipment, lay.

When I started to watch the home copy, and the identical first scenes with musical accompaniment came on, I thought that I owned the silent version.  On one hand, I was disappointed because I really was hoping to see the two as close together as possible as I have to admit that I don’t have the world’s greatest memory any longer, but then I believed that the silent was harder to come by, so thought that it would be easier to pick up a talkie version.  Then I could watch them side-by-side if need be.  But that wasn’t the case after all, although I was fooled for just over eight minutes.  Those first scenes in the talking version are the same shots as in the silent.  This viewing, though, gave me a chance to reflect on the meaning of the scenes, something I totally forgot about by the end of the earlier viewing of the film.  I believe it’s there to demonstrate the importance and dangerous details of the job that the hero, Detective Frank Webber (John Longden) meets up with during his daily grind.

After this “introduction” to law enforcement, over the soundtrack accompanying the copy I was watching, voices start to mumble and murmur.  At first I didn’t know what they were saying, and I took this for being part of a silent sound effect.  But what you begin to gather is that the two men, Frank and his partner (played by who I understand to be a real life ex-detective, Sergeant Bishop) are finished with their work day and are talking in a jovial way as they head to wash up in the Yard’s loo.

The sound, though, becomes apparent in the scene where Frank meets up with his girlfriend Alice White (Anny Ondra).  She’s annoyed that he made her wait for half an hour, yet again.  Of course his job isn’t nine-to-five exactly; we realize this.  But still, we can also understand her annoyance.

Next comes Hitchcock’s very first cameo, riding on the London Underground, and it’s totally amusing.  The same shot is used in both versions. 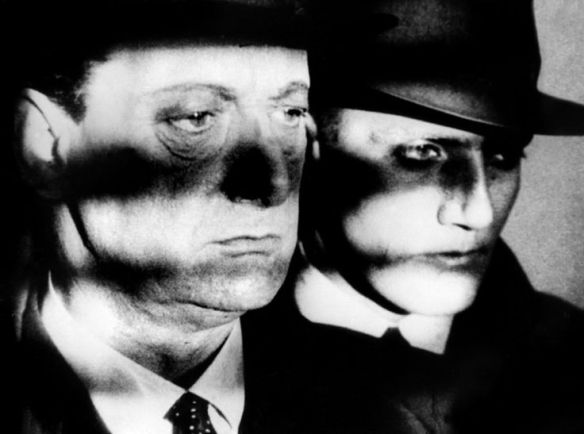 What follows this is pretty much the same scene with the dialogue in the talkie matching the intertitles in the silent.  It may be Alice’s dissatisfaction with her feeling that she always comes second to Frank’s job that is the catalyst which drives her to want to step out with other men.  But it’s never really explained why Alice has chosen to rendezvous with an Artist (Cyril Ritchard) she’s flirted with at some earlier date when she’s now with Frank at a popular restaurant.  Maybe the risk is the thrill for her.  We never really know although I can always understand why a girl wants to have some excitement especially when her boyfriend has become run-of-the-mill in her books.  And it’s hard to judge her motives even as we get to know her as the story unwinds.  If she wants to make Frank jealous, then why does she wait until she thinks he’s gone from the restaurant before she beckons the Artist over to her table?  Otherwise, as I said above, why meet this other man while she’s on a date with her boyfriend?

Without dialogue, to me, Alice appears in the silent version in this scene, more sophisticated yet more shallow than she does in the talkie.  But as Frank hasn’t quite left the premises, he sees Alice, without her noticing him, leave the restaurant with an unknown man only moments after he headed out of the place in a huff.

The blackmailer, the person responsible for the title of the film, makes his first appearance directly after the restaurant scene where he eavesdrops into Alice and the Artist’s conversation.  After this, the  most pivotal scene takes place and, for the most part, is mostly re-shot for the talkie.  Although she becomes less sophisticated-seeming in this next scene then she did in the one at the restaurant, Alice appears even more naïve in the talkie, while the Artist feels more sinister in the silent.  Hitchcock retakes the scene where the Artist kisses her passionately.  In the silent version, she first pecks him on the lips which he takes as a sign of encouragement, while in the talkie, he seductively moves the straps of her dress as he traces his fingertips across her shoulders before kissing her. 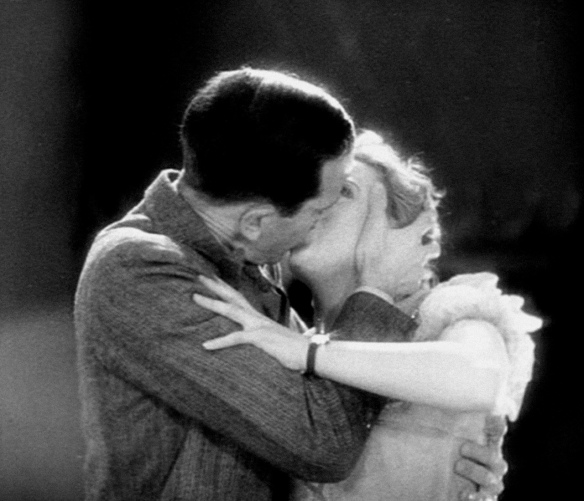 The kiss in the Silent 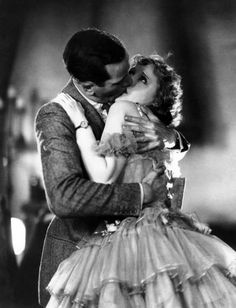 The kiss in the Talkie

Prior to the above scene, Alice changes from her street clothes into a ballerina-type dress behind a screen.  In the silent, she does this in real time as we watch her undo and remove her dress, eye her undergarments and watch her put on the costume.  The Artist isn’t in the scene yet we are totally immersed.  In the talking version, there is a piano set up just in front of and to the right of the screen that Alice changes behind.  Hitchcock must have already realized that in a sound film, watching someone change clothes for the few minutes that it would take, would not work well if something else interesting wasn’t going on.  So, while Alice changes, we also watch the Artist play piano while he entertains us all with a song.  Certainly he appears less sinister here than in the silent where we’re wondering what he’s doing and thinking while we watch Alice change. 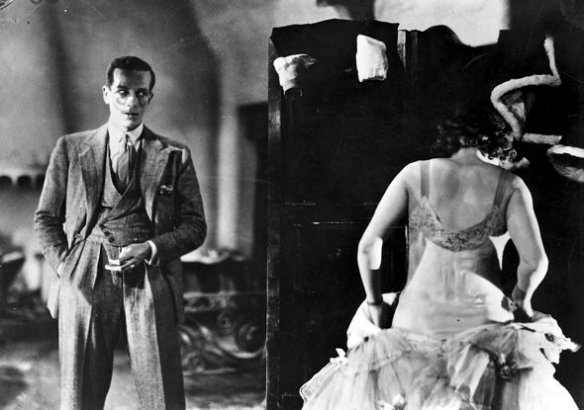 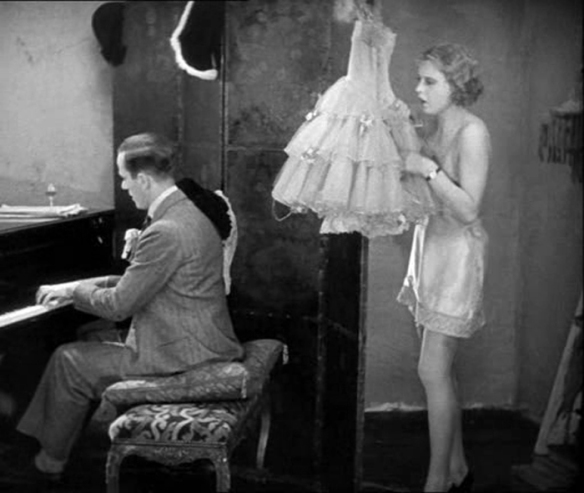 Changing clothes in the Talkie 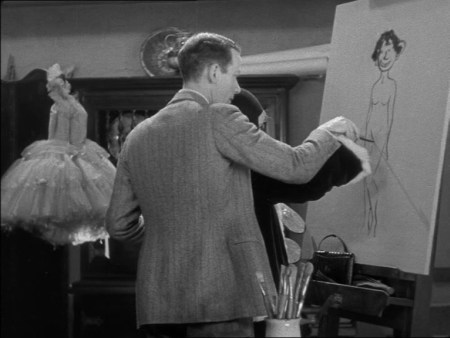 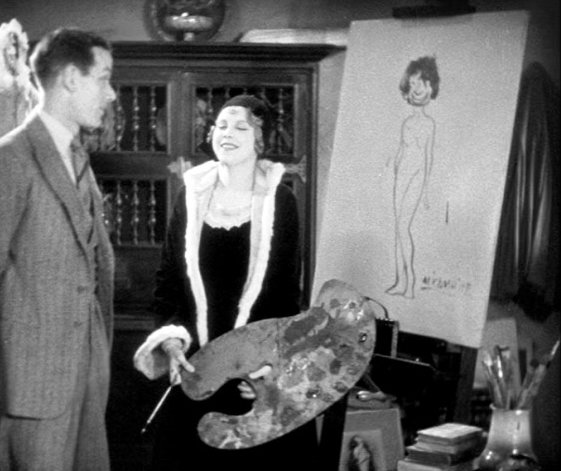 A scene from the Talkie version – the drawing is different

Specifically, there are two scenes that photographically stand out and are used in both films.  The first is when Alice and the Artist are climbing up several staircases to get to his apartment and the camera is on a trolley that rises along with them.  The staircase and shadowing on the wall are beautiful and the actors are graceful in their movements.  The second outstanding shot happens while the blackmailer is being chased through London’s British Museum and Alice is sitting at her table thinking.  The shots are interspersed, and at one point when Alice rises from chair, the shadows on the wall create a noose around her neck and head.  Very, very dramatic. 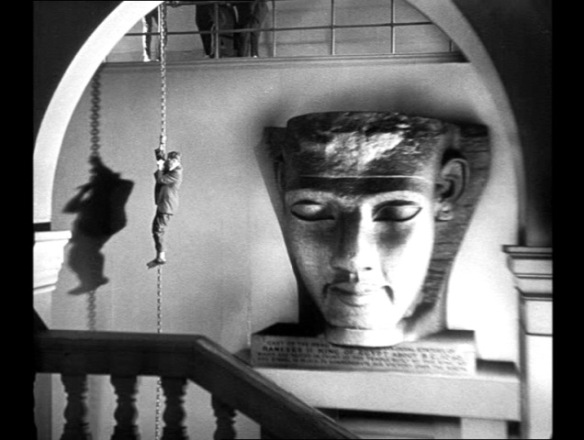 I love this scene at the British Museum

In the talking version, a scene that stands out for its use of sound, is when a neighbour (Phyllis Monkman) gossips to Anny and her parents (Sara Allgood and Charles Paton) about a knife murder.  There’s also a great visual in both films where Anny watches a neon sign of a cocktail shaker morph into a stabbing knife.  There is a painting by the Artist of a laughing jester which we view four times during the film.  Depending on what has happened, the expression of the jester morphs in degrees from comic to sinister at each passing view. 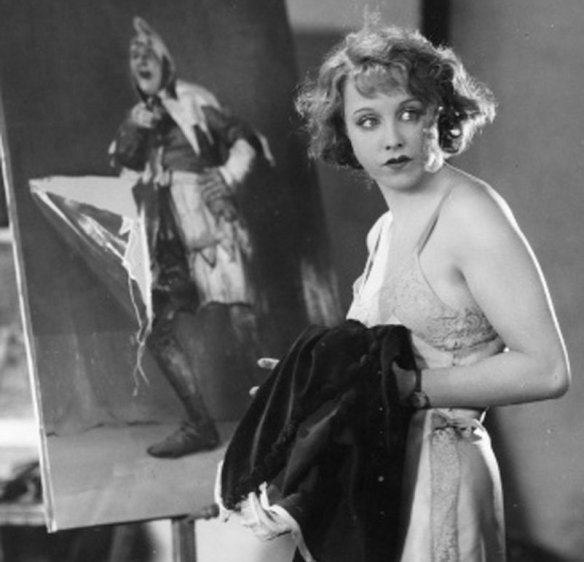 This brings me to the actor Donald Calthrop who plays Tracy, the blackmailer.  An English actor with 64 film credits to his name, I remembered having seen him in the 1935 film Scrooge, well cast as Bob Cratchit.  And then just two days ago, I watched the British film Rome Express (1932) where he plays pretty much the same character as in Blackmail.  (Not a bad little film with some interesting subtleties; it also features Cedric Hardwicke, Esther Ralston AND Conrad Veidt who’s wonderfully nasty to the core!) 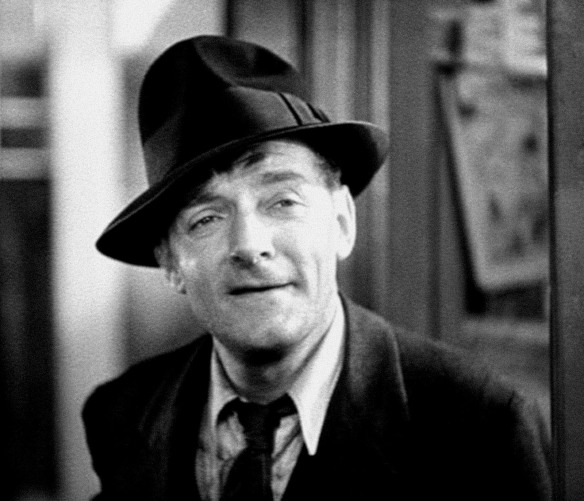 Hitchcock used Calthrop’s services in a number of his other films, including Juno and the Paycock (1929), Murder! (1930) and Number Seventeen (1932). Going through his filmography, the earliest film I would have seen Donald Calthrop in was Shooting Stars (1928) at Cinevent on Friday, May 22, 2015.  I loved this film and even though I didn’t know who he was, he was villainous and memorable.  Although I haven’t seen it, I do own a copy of the 1936 version of Broken Blossoms where Calthrop plays—and this I must see—a Chinaman.  I would have seen him in the 1937 Love From a Stranger (there’s also a 1947 version of this film), Fire Over England (1937), and his very last film Major Barbara (1941).  He is also in the film Thunder in the City (1937) which Toronto Film Society will be screening at its upcoming May Movie Magic weekend. 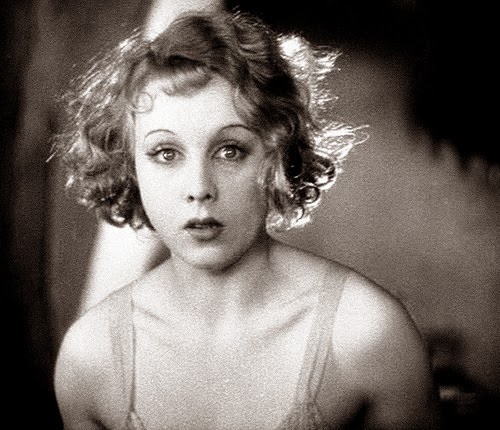 Anny Ondra in a close-up

Anny Ondra, who played Alice White was pretty, and a beauty particularly in the close-ups.  Born in the Austrian-Hungarian Empire in 1902, her dialogue was dubbed by the actress Joan Barry in Blackmail.  The limited sound technology available at the time meant that Barry had to dub Anny Ondra’s voice in real time as she performed the role.  Looking at Ondra’s filmography of 89 credits, I think this was her only English-language film, although Hitchcock also used her talents in his silent The Manxman (1929). 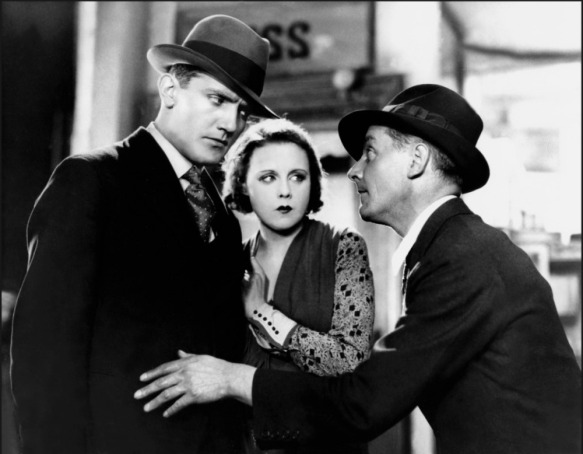 I went with a friend to see the silent version and he had with him the book Hitchcock, the First Forty-Four Films by Éric Rohmer and Claude Chabrol.  Although I haven’t read it, I would be very interested as it’s described as an influential, chronological analysis of Hitchcock’s first forty-four films, from Number Thirteen (1922) to The Wrong Man (1957).

Books that I own are: Hitchcock Becomes “Hitchcock”: The British Years (2000) by Paul M. Jensen, an interesting critique of these early films rather than a biography on Hitchcock; The Dark Side of Genius: The Life of Alfred Hitchcock (1983) by Donald Spoto which I read those many years ago when I once took a Hitchcock evening course at the University of Toronto; and Alfred Hitchcock: A Life in Darkness and Light (2003) by Patrick McGilligan, which looks totally interesting but I haven’t read as of yet.  (McGilligan also wrote a very intense, detailed book on Fritz Lang.) 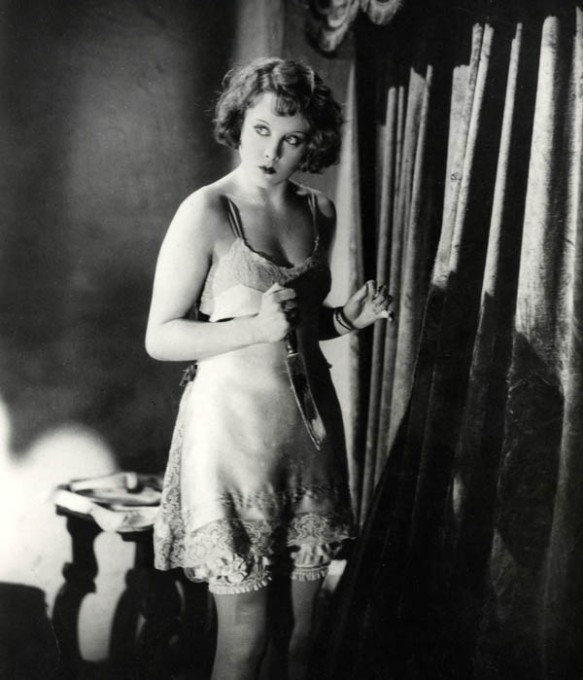 So, of course I hope you are intrigued to see these two films—even if you’ve seen one or both before—in close time-proximity to each other.  Especially if you’re like me and love comparisons and remakes.  These two films are well worth it.